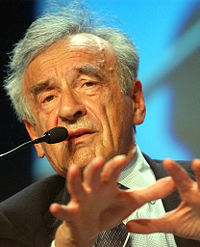 Wharton Club Members & Guests
Invited to hear this acclaimed humanitarian discuss
"Peace and War in the Jewish Tradition"
with Leon Wieseltier, literary editor of The New Republic
Sorry - sold out

In exile and in their homeland, Jews have reflected profoundly upon peace and war.

In our time, Elie Wiesel has been a great guide in our attempts to understand both. To honor the memory of his friend Yitzhak Rabin, Mr. Wiesel joins Leon Wieseltier, literary editor of The New Republic magazine, in a far-ranging discussion of how the Jewish tradition helps us to think morally and responsibly about Jewish powerlessness and Jewish power, about the ideal of peace and the reality of war.

Buy your tickets - Members only:

Tickets are $23/person (through this site for Wharton Club members and guests only - and now. Maximum per member: Two tickets - one for you, and one for your guest. This is because the event is sold out, and we have some of the only available tickets.

Tickets will be held at "Will Call."

Elie Wiesel (born Eliezer Wiesel on September 30, 1928)[1] is a writer, political activist, Nobel Laureate and Holocaust survivor. He is the author of over 40 books, the best known of which is Night, a memoir that describes his experiences during the Holocaust and his imprisonment in several concentration camps.

Wiesel was awarded the Nobel Peace Prize in 1986. The Norwegian Nobel Committee called him a "messenger to mankind," noting that through his struggle to come to terms with "his own personal experience of total humiliation and of the utter contempt for humanity shown in Hitler's death camps," as well as his "practical work in the cause of peace," Wiesel has delivered a powerful message "of peace, atonement and human dignity" to humanity.[2]

Early life and experiences during the Holocaust Buchenwald, 1945. Wiesel is on the second row from the bottom, seventh from the Calvin.

Wiesel was born in Sighet, (now Sighetu Marmaţiei), Maramureş, Kingdom of Romania, to Shlomo and Sarah Wiesel. Sarah was the daughter of Dodye Feig, a Hasid and farmer from a nearby village. Elie Wiesel had three sisters: Hilda and Bea, who were older than he, and Tzipora, who was the youngest in the family. Shlomo was an Orthodox Jew of Hungarian descent, and a shopkeeper who ran his own grocery store. He was active and trusted within the community, and had spent a few months in jail for having helped Polish Jews who escaped to Hungary in the early years of the war. It was Shlomo who instilled a strong sense of humanism in his son, encouraging him to learn Modern Hebrew and to read literature, whereas his mother encouraged him to study Torah and Kabbalah. Wiesel has said his father represented reason, and his mother, faith (Fine 1982:4).

The town of Sighet was re-annexed to Hungary in 1940. In 1944 Elie, his family and the rest of the town were placed in one of the two ghettos in Sighet. Elie and his family lived in the larger of the two, on Serpent Street. On May 16, 1944, the Hungarian authorities deportedAuschwitz – Birkenau. While at Auschwitz, the number A-7713 was tattooed into his left arm. Wiesel was separated from his mother and sister Tzipora, who are presumed to have been murdered at Auschwitz. Wiesel and his father were sent to the attached work camp Buna-Werke, a subcamp of Auschwitz III Monowitz. He managed to remain with his father for a year as they were forced to work under appalling conditions and shuffled between concentration camps in the closing days of the war. On January 29, 1945, just a few weeks after the two were marched to Buchenwald and only months before the camp was liberated by the American Third Army on April 11, Wiesel's father suffered from dysentery, starvation, and exhaustion, and was later sent to the crematoria. The last word his father spoke was “Eliezer”, Elie's name.[3] the Jewish community in Sighet to

After the war, Wiesel was placed in a French orphanage, where he learned the French language and was reunited with both his older sisters, Hilda and Bea, who had also survived the war. In 1948, Wiesel began studying philosophy at the Sorbonne.

He taught Hebrew and worked as a choirmaster before becoming a professional journalist. He wrote for Israeli and French newspapers, including Tsien in Kamf (in Yiddish) and the French Jewish Magazine, L'arche. However, for 10 years after the war, Wiesel refused to write about or discuss his experiences during the Holocaust. Like many survivors, Wiesel could not find the words to describe his experiences. However, a meeting with François Mauriac, the 1952 Nobel Laureate in Literature, who eventually became Wiesel's close friend, persuaded him to write about his Holocaust experiences.

Wiesel first wrote the 900-page tome Un di velt hot geshvign (And the World Remained Silent), in Yiddish, which was published in abridged form in Buenos Aires. Wiesel rewrote a shortened version of the manuscript in French, and it was published as the 127-page novella La Nuit, and later translated into English as Night. Even with Mauriac's support, Wiesel had trouble finding a publisher for his book, and initially it sold few copies.

Life in the United States

The house where Elie Wiesel was born

In 1955, Wiesel moved to New York City, having become a U.S. citizen: due to injuries suffered in a traffic accident, he was forced to stay in New York past his visa's expiration and was offered citizenship to resolve his status. In the U.S., Wiesel wrote over 40 books, both fiction and non-fiction, and won many literary prizes. Wiesel's writing is considered among the most important in Holocaust literature. Some historians credit Wiesel with giving the term 'Holocaust' its present meaning, but he does not feel that the word adequately describes the event and wishes it were used less frequently to describe significant occurrences as everyday tragedies (Wiesel:1999, 18).

He was awarded the Nobel Peace Prize in 1987 for speaking out against violence, repression, and racism. He has received many other prizes and honors for his work, including the Congressional Gold Medal in 1985, and was elected to the American Academy of Arts and Letters in 1996. He is also the recipient of The International Center in New York's Award of Excellence. Wiesel has published two volumes of his memoirs. The first, All Rivers Run to the Sea, was published in 1994 and covered his life up to the year 1969 while the second, titled And the Sea is Never Full and published in 1999, covered 1969 to 1999.

Wiesel and his wife, Marion, started the Elie Wiesel Foundation for Humanity. He served as chairman for the Presidential Commission on the Holocaust (later renamed U.S. Holocaust Memorial Council) from 1978 to 1986, spearheading the building of the United States Holocaust Memorial Museum in Washington, DC.

Wiesel is particularly fond of teaching and holds the position of Andrew Mellon Professor of the Humanities at Boston University. From 1972 to 1976, Wiesel was a Distinguished Professor at the City University of New York and member of the American Federation of Teachers. In 1982 he served as the first Henry Luce Visiting Scholar in Humanities and Social Thought at Yale University. He also co-instructs Winter Term (January) courses at Eckerd College, St. Petersburg, Florida. From 1997 to 1999 he was Ingeborg Rennert Visiting Professor of Judaic StudiesBarnard College. at

Wiesel has become a popular speaker on the subject of the Holocaust. As a political activist, he has advocated for many causes, including Israel, the plight of Soviet and Ethiopian Jews, the victims of apartheid in South Africa, Argentina's Desaparecidos, Bosnian victims of genocide in the former Yugoslavia, Nicaragua's Miskito Indians, and the Kurds. He recently voiced support for intervention in Darfur, Sudan.[4]Romanian government to research and write a report, released in 2004, on the true history of the Holocaust in Romania and the involvement of the Romanian wartime regime in atrocities against Jews and other groups, including the Roma. The Romanian government accepted the findings in the report and committed to implementing the commission's recommendations for educating the public on the history of the Holocaust in Romania. The commission, formally called the International Commission for the Study of the Holocaust in Romania, came to be called the Wiesel Commission in honor of his leadership. He also led a commission organized by the

Wiesel is the honorary chair of the Habonim Dror Camp Miriam Campership and Building Fund, and a member of the International Council of the New York-based Human Rights Foundation.

In 2002[6], he inaugurated the Elie Wiesel Memorial House in Sighet in his childhood home.

In early 2006, Wiesel traveled to Auschwitz with Oprah Winfrey, a visit which was broadcast as part of The Oprah Winfrey Show on May 24, 2006.[7] Wiesel said that this would most likely be his last trip there.

In September 2006, he appeared before the UN Security Council with actor George Clooney to call attention to the humanitarian crisis in Darfur.

On November 30, 2006 Wiesel received an honorary knighthood in London in recognition of his work toward raising Holocaust education in the United Kingdom.[8]

On February 1, 2007, Wiesel was attacked in a San Francisco hotel. Twenty-two year old Eric Hunt confessed on an antisemitic website to the attack, saying he had tried to drag Wiesel out of the hotel elevator in order to "bring [him] to my hotel room where he would truthfully answer my questions regarding the fact that his non-fiction Holocaust memoir, Night, is almost entirely fictitious."[9] On February 17, 2007, Hunt was arrested in Montgomery Township, New Jersey. He faces charges that include attempted kidnapping, false imprisonment, elder abuse, stalking, battery and the commission of a hate crime.[10]

On April 25, 2007, Wiesel was awarded an honorary doctorate of humane letters degree from the University of Vermont.

During the early 2007 selection process for the Kadima candidate for President of Israel, Prime Minister Ehud Olmert reportedly offered Wiesel the nomination (and, as the ruling-party candidate and an apolitical figure, likely the Presidency), but Wiesel "was not very interested".[11]Shimon Peres was chosen as the Kadima candidate (and later President) instead.

On April 9, 2008, Wiesel was presented with an Honorary Degree, Doctor of Letters at the City College of New York