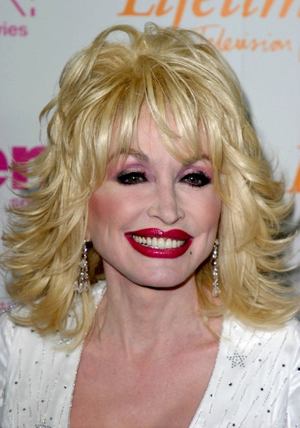 Wharton Club members & guests invited to
Luncheon, National Press Club, from 12-2, not 9 to 5:
Inimitable superstar, entrepreneur & philanthropist Dolly Parton
Will discuss her program to increase literacy & her career - SOLD OUT!

(Everyone who got confirmation from us DOES have a ticket, but that's all - NO MORE AVAILABLE - Sorry. PS - It's reason why you need to act fast if you really want to attend an event. Sometimes we have many tix, other times, such as this, very few.)

You are invited the luncheon at the Press Club on Tuesday, February 10, 2009 with Dolly Parton.

Parton created a free book distribution program in 1996 as a way to increase literacy in the region where she grew up. Every child in Sevier County, Tenn., is eligible to receive a free age-appropriate book each month in the mail until the age of 5. The program has since expanded to two other cities where Parton's businesses operate.

Parton, who discussed her literacy program in an NPC luncheon in 2000, has donated an autographed book to the NPC 5K run/walk scholarship fund-raising auction each year since then.

During her NPC speech eight years ago, Parton said:

"They say that you're never so tall as when you stoop to help a child. I'd better not be stooping had, I? I think I'll just stand up for the kids. And a few years ago, I started a public foundation called the Dollywood Foundation. And that's to help kids in my home county. We started out to help the high school dropout rate, and we did, too. In fact, we were able to change it from over 30 percent to less than 6 percent in about five years. And I'd say that's pretty good."

This is a return visit for her; the first, many years ago, sold out, and this one will, too. Given her musical, acting, and entrepreneurial, plus her self-effacting wit ("I spend a lot of money to look this cheap."), you should join us so that you, too, can say, "Hello, Dolly."

Reservations: $28 for current Wharton Club members and their guests only. You must reserve in advance on our site. We have only a limited number of seats.

“I’ve always been a writer. My songs are the door to every dream I’ve ever had and every success I’ve ever achieved,” says Dolly Parton of her incredible career, which has spanned nearly five decades and is showing no signs of slowing down.

An internationally renowned superstar, the iconic and irrepressible Parton has contributed countless treasures to the world of music entertainment, penning classic songs such as “Jolene,” “Coat of Many Colors,” and her mega-hit “I Will Always Love You.” With 1977’s crossover hit “Here You Come Again,” she successfully erased the line between country and pop music without noticeably altering either her music or her image. “I’m not leaving country,” she said at the time, “I’m just taking it with me.”

Making her film debut in the 1980 hit comedy 9 to 5, Dolly earned rave reviews for her performance and an Oscar nomination for writing the title tune, along with her second and third Grammy Awards. Roles in Steel Magnolias, Best Little Whorehouse in Texas, Rhinestone, and Straight Talk followed, along with two network television series, made for television movies, network and HBO specials, and guest-starring roles in series television. In 2006, Dolly earned her second Oscar nomination for “Travelin’ Thru,” which she wrote for the film Transamerica.

Dolly Parton’s remarkable life began very humbly. Born January 19, 1946 on a farm in Sevier County, Tennessee, Dolly is the fourth of twelve children. Her parents, Robert Lee and Avie Lee Parton struggled to make ends meet in the impoverished East Tennessee hills. This hard rural life was the foundation of Dolly’s career, as she began singing almost before she could talk, according to her father. By age 10, Dolly was performing on local television and radio shows in nearby Knoxville, Tennessee. “I always wanted to be a star. It just seemed natural to me,” she said. “Making music is all I’ve ever known.”

Dolly left for Nashville the day after her high school graduation. On her first afternoon there, she met a young man, Carl Dean, who would become her husband. Two years later, in May 1966, they were married. “He’s good for me, cause he’s so different in nature from me,” she smiles.

In 1967, Dolly’s career took off when country music superstar Porter Wagoner began featuring her on his popular syndicated television show, exposing Dolly to over 45 million people in more than 100 markets and attracting the attention of record executives at RCA. Dolly and Porter had 14 Top Ten hits together, and Dolly quickly blossomed into one of the best-selling country artists in music history. By 1974, Dolly ended her working relationship with Wagoner. She was voted the Country Music Association Female Artist of the Year two years in a row, and in 1978, Dolly was named the CMA Entertainer of the Year.

In 1974, “I Will Always Love You” topped the charts and did so again in 1982 when it was revived in the movie Best Little Whorehouse in Texas, making Dolly the first artist to earn a number one record twice with the same song. In 1992, the song was recorded by Whitney Houston for the movie The Bodyguard and went on to sell in excess of 4 million copies, topping the charts once again. “I Will Always Love You” was named BMI’s Most Performed Song of the Year in 1993.

Dolly saw a cherished dream become a reality in 1986 with the opening of her own theme park called Dollywood, in Pigeon Forge, Tennessee, at the base of the Great Smoky Mountains. The state’s number one tourist attraction, Dollywood was selected by the theme park industry as one of the top three theme parks in the world in 2006.

In 1988, she began the Dollywood Foundation to inspire children in her home community to dream more, learn more, do more and care more. Currently the foundation funds the Dolly Parton Imagination Library across America and in Canada, by giving every preschool child a book each month from the time he or she is born until the child reaches kindergarten. With the help of local sponsors, this program has expanded to over 800 communities in 41 states and will give away over 5 million books in 2007 alone. Dolly says, “My dad was prouder of me for this program than for my music career. He thought it was grand that all the kids called me the Book Lady.”

Long respected for her instinctive business savvy, Dolly established Velvet Apple Music (BMI) early in her career and owns the copyrights and the publishing for her vast songwriting empire. She owns her own successful record label, Blue Eye Records.

Dolly Parton transitioned her flair for making hit music into producing hit movies and television shows when she established Sandollar Productions with former manager, Sandy Gallin. A film and television production company, Sandollar has produced feature films such as Father of the Bride I and II, Straight Talk, Sabrina, Shining Through, IQ, and the Academy Award-winning (for Best Documentary) Common Threads: Stories from the Quilt, along with Fox television shows Babes and Buffy the Vampire Slayer.

Her 1994 autobiography was aptly titled “My Life and Other Unfinished Business.”

Dolly Parton is the most honored female country performer of all time. Achieving 25 RIAA certified gold, platinum and multi-platinum awards, she has had 25 songs reach number 1 on the Billboard Country charts, a record for a female artist. She has 41 career top 10 country albums, a record for any artist, and she has 110 career charted singles over the past 40 years. All-inclusive sales of singles, albums, hits collections, paid digital downloads and compilation usage during her Hall of Fame career have reportedly topped a staggering 100 million records world-wide.

In 1999, Dolly Parton was inducted as a member of the Country Music Hall of Fame. She has her own star on the Hollywood Walk of Fame and became a member of the National Academy of Popular Music Songwriters Hall of Fame in 2001. Broadcast Music, Inc. honored Dolly with their Icon Award in 2003, and in 2004, the U.S. Library of Congress presented her with their Living Legend Award for her contribution to the cultural heritage of the United States. This was followed in 2005 with the National Medal of Arts, the highest honor given by the U.S. government for excellence in the arts.

In December, 2006 Dolly was honored by the Kennedy Center for the Performing Arts for her lifetime of contributions to the arts. In June 2007 Dolly was named the recipient of the prestigious Johnny Mercer Award from the Songwriter’s Hall of Fame. The Johnny Mercer Award is exclusively reserved for a songwriter who has already been inducted into the Songwriters Hall of Fame in a prior year, and whose body of work is of such high quality and impact, that it upholds the gold standard set by the legendary Johnny Mercer.

Yet with all of the national and international recognition given her, Dolly Parton calls the bronze statue of her, which stands on the courthouse lawn in her hometown of Sevierville, Tennessee, her “greatest honor, because it came from the people who know me.”

Always dreaming and always looking forward, Dolly is busier than ever. Writing the music and lyrics for the upcoming Broadway musical version of 9-5, working on various children’s projects, and writing and recording a new album, “Backwoods Barbie,” which set for release in February 2008; these projects are just a few of her many interests at the moment. The phenomenon of Dolly Parton continues to flourish, as she remains one of world’s true superstars.