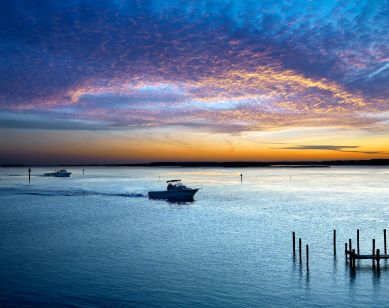 City Club of Washington Presentation of

“The Last Boat Out”

The largest bay in the United States is dying. But the Chesapeake Bay, once brimming with life and commerce, is not dying alone. It's taking with it a way of life for the thousands of watermen whose families have made their living on the bay for generations. It’s not too late to save them both.

Join PBS Filmmaker Laura Seltzer for an interactive screening and discussion of this important topic and heartfelt account of life on the Bay. Followed by a Chesapeake Bay dinner created especially for the evening by Executive Chef Reid Badger.

Cream of Sweet Corn Topped with

To learn more about the film visit: www.LastBoatOut.com Reservation required.

More about the film:

The largest bay in the United States is dying. But the Chesapeake Bay, once brimming with life and commerce, is not dying alone. It's taking with it a way of life for the thousands of watermen whose families have made their living on the bay for generations.

It’s not too late to save them both.

The Last Boat Out documentary weaves two tales: The inspiring story of a family of watermen tirelessly trying to preserve their life working the waters of the bay. It is also the story of a bay battered by development and pollution yet struggling to stay alive.

It is a story of neglect, mistakes, diminishing harvests, and development run amok, but it is also a story of hope and human determination:

• Watermen and the Virginia community is helping to replenish the bay through oyster farming and oyster gardening.
• Environmental organizations are working with watermen by suing the Environmental Protection Agency for failing to remove the bay from the nation’s dirty waters list.

Your support will help educate the public about the potential demise of the Chesapeake Bay and its watermen.

Back to the top

About the Production Team

Sam Waterston, an Academy-award winning actor and activist, is the Narrator of The Last Boat Out. Waterston is perhaps best known for his portrayal of District Attorney Jack McCoy on the long-running NBC television series Law & Order, as well as for his Academy-award nominated portrayal of New York Times journalist Sydney Schanberg in "The Killing Fields". During his lauded 40-year career, Waterston has been equally at home on stage, in movies, and on television. He's appeared in many films, including "The Great Gatsby", "Rancho Deluxe", "Journey Into Fear", "Capricorn One", "Heaven's Gate", "Hopscotch", "Interiors", "Hannah and Her Sisters", "Crimes and Misdemeanors", and "Mindwalk". Waterston is a six time Emmy Award nominee, and earned a Golden Globe in 1993 for Best Performance By An Actor in A TV Series Drama for "I'll Fly Away".

Laura Seltzer is the Producer, Director and Writer of The Last Boat Out, which is currently airing on PBS stations throughout the country. The film tells the story of a family of watermen who are trying to continue harvesting the waters of the Chesapeake Bay. Their livelihoods are threatened by diminishing harvests and relentless development.

As a native of Newport News, Virginia, Seltzer was inspired to give voice to the few remaining working watermen in her hometown.

Laura Seltzer has been producing, directing and managing the production of award-winning documentaries and educational programs since 1993. She founded Seltzer Film & Video in 1995 for the purpose of producing social action videos that inspire change.

Bob Kanner is the Editor of The Last Boat Out. He has been producing and editing projects for domestic and international clients for over twenty-five years. He has extensive experience editing in all formats including documentary, series and feature films. Kanner is also proficient in High Definition editing.

Kanner is Vice President and Senior Editor of Team Sound and Vision, the premiere Washington, D.C. based production house. He co-produces and edits award-winning programs for several documentary and entertainment clients. Kanner’s recent projects include Made in Spain for PBS, American Occupation for the History Channel, Eco Hotspots for the Voom Network and Animal Rescues: Hurricane Katrina for Animal Planet.

As Staff Editor for CBS News, Kanner was responsible for cutting feature news programming for the network. He edited the lead stories for the prime time news shows; Nightwatch, the CBS Morning News, the CBS Evening News and Face The

Kanner has received five Emmy Awards and numerous TELLY Awards for excellence in programming. His work has been recognized by NATAS and he edited the national Emmy Award-winning special Life On Mars for Cronkite Ward Television.

“When the Watermen Are Gone” by Selma Peterson