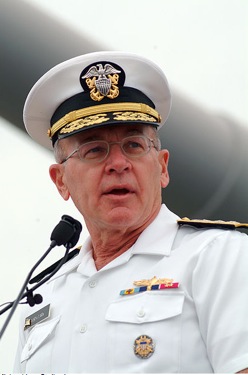 Learn How Admiral Clark, Steve Jobs & Bono Create
"Connection Cultures" to Engage Others & Obtain Extraordinary Results -
and How You Can Emulate Them
Lunch in Downtown DC

About the Speakers and the Program:

Michael Lee Stallard has written about some of the most effective leaders throughout history. He identified how they develop both task excellence and relationship excellence to produce sustainable superior performance.

What sets the most effective leaders apart, according to Stallard, is that they develop “Connection Cultures” so that the people they lead give their best efforts and align their behavior with the organization’s goals.   Stallard has written about Steve Jobs of Apple, the founders of Google, Bono of U2 and Ed Catmull of Pixar Animation.

One of Stallard’s favorites is CNO Admiral Vern Clark (read what Stallard wrote about him in the Leader to Leader Journal entitled, "To Boost Performance, Connect with the Core." These are a few of the outstanding results Michael wrote about that the Admiral achieved - results similar to what others have done in the public and private sectors:

The Navy achieved some impressive gains during his tenure as CNO.... In a little more than a year after Admiral Clark became CNO, first-term reenlistment soared from less than the Navy’s goal of 38 percent to 56.7 percent.

As the Navy improved sailor retention and developed greater alignment with Admiral Clark’s vision, it became faster and more responsive. Within a matter of hours following the terrorist attacks on September 11, 2001, aircraft carriers, Aegis destroyers, and cruisers were in position to protect America’s shores. This was due in part to the fact that naval leaders anticipated what had to be done and took action before they received orders. At the Pentagon in Washington, D.C., command and control of the Navy was quickly reestablished and planning for America’s response began while the embers of the fire from the terrorist attack still smoldered a short distance away.

Clark also serves as Chairman of the Board, SRI International, and he is on the Board of Directors of Raytheon Company, Rolls Royce North America, Horizon Lines, and the World Board of Governors of the USO.  He is a Distinguished Professor at Regent University and serves as a Trustee at Regent University, Vanguard University and Air University.  He is a senior advisor with Booz Allen Hamilton, and is on advisory boards with the Defense Policy Board, Fleishman-Hillard, Robertson Fuel Systems LLC, Cubic Defense Applications, Inc., and the Executive Committee of Military Ministry.

He holds an MBA from the University of Arkansas and a Bachelor of Arts degree from Evangel University. He attended Officer Candidate School and received his Navy commission in August 1968.

Michael Lee Stallard is president of the leadership training and coaching firm E Pluribus Partners that he co-founded in 2002.  In this role he helps leaders engage employees to boost productivity, innovation and organizational performance.   He has spoken, taught workshops and consulted at corporate, government, academic and social organizations including GE, Google, the Internal Revenue Service, Johnson & Johnson, NASA, the U.S. Securities and Exchange Commission, and Yale-New Haven Hospital.

Prior to founding E Pluribus Partners, Michael was chief marketing officer for businesses at Morgan Stanley and Charles Schwab. Earlier in his career, he worked in investment banking at Barclays de Zoete Wedd and marketing and financial management positions at Texas Instruments.

Michael is the primary author of the bestselling book Fired Up or Burned Out: How to Reignite Your Team’s Passion, Creativity and Productivity and a regular contributor to leadership periodicals worldwide. In new media, michaelleestallard.com is consistently recognized as one of the top leadership blogs.  Michael is a guest lecturer at the Darden Graduate School of Business at the University of Virginia.

In this unique, educational and inspiring session you will learn:

Program Details - Lunch Option (If you want to attend the breakfast at Tysons, you should go back to the Event page for that option, 7 am on September 13. This page is for luncheon only):

Click here to reserve your place(s)(list of registrants to be at lunch)....!!