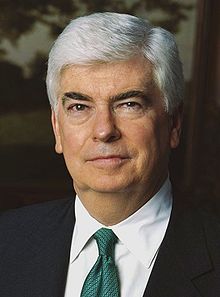 Just a week before the Academy Awards ceremony, Christopher Dodd, chairman and CEO of the Motion Picture Association of America, will speak at a National Press Club luncheon on Friday, Feb. 15.
Dodd, a former U.S. senator who now serves as Hollywood’s top lobbyist, will discuss the state of the motion picture industry. He will focus on the creative and technological advancements being made as film makers adapt to an ever-growing number of platforms for viewing film and TV.
Dodd represented Connecticut in Congress for 36 years and is perhaps best known as the co-author of the sweeping Dodd-Frank financial reform legislation that passed in the wake of the 2008 financial crisis.
Friday, February 15, 2013 :30 PM
Location: Ballroom

Reservations: $35/person for current Wharton Club members and their guests only. You must reserve in advance on our site. We have only a limited number of seats.

Former United States Senator Chris Dodd is Chairman and Chief Executive Officer of the Motion Picture Association of America, Inc., which serves as the voice and advocate of the U.S. motion picture, home video and television industries around the world/

Appointed in March 2011, Senator Dodd leads the Association’s efforts to represent the interests of one of the most creative and productive industries in America. The major motion picture studios consistently produce and distribute the most sought after and enjoyable entertainment on earth and protecting this great American export during a challenging economy and an ever-changing technological landscape is Senator Dodd’s highest priority.  Senator Dodd served in the United States Congress representing Connecticut for 36 years – six years in the House of Representatives and thirty years in the U.S. Senate. Senator Dodd was one of the most widely respected legislators during his years in Congress, earning the trust and admiration of both Democrats and Republicans.

As a key participant in nearly every major national policy debate over the past three decades, Senator Dodd authored or co-authored major legislation in the areas of education, health, financial services, foreign policy, and election reform. In his last term in the Senate, Senator Dodd enacted several major pieces of legislation. The Senator played a decisive role in writing the significant health care reform bill with the passage of the Patient Protection and Affordable Care Act. And Senator Dodd was the principal author of the Dodd-Frank Wall Street Reform and Consumer Protection Act, crafted in the wake of one of the worst economic downturns in history.

Senator Dodd is perhaps best known for bringing much-needed attention to children’s and education issues. He formed the first children’s caucus in the Senate, authored the first child care legislation since World War II, and wrote the Family and Medical Leave Act, which has helped ensure that 100 million Americans didn’t have to choose between the jobs they need and the families they love.

A recipient of the Edmund S. Muskie Distinguished Public Service Award recognizing leadership in foreign policy, and a former senior member of the Senate Foreign Relations Committee, Senator Dodd is a recognized expert on Latin America. During his tenure in Congress he also traveled extensively in Europe, Asia and Latin America and served as Co-Chair of the U.S. – India Senate Caucus.

Senator Dodd’s commitment to public service was instilled at an early age by his parents, the late Senator Thomas J. Dodd and Grace Murphy Dodd. Thomas Dodd was the executive trial counsel at the Nuremberg War Crimes Tribunal before he was elected to both the House of Representatives and the United States Senate.

Chris Dodd is the longest serving member of Congress in Connecticut history – having been popularly elected eight times to the Congress. He was also the youngest person elected to the House of Representatives from the Second District of Connecticut, as well as the youngest person elected to the Senate in Connecticut history. In 2007 Senator Dodd was a candidate for the Democratic nomination for President.

Following his graduation from Providence College, Senator Dodd answered John F. Kennedy’s call to service and joined the Peace Corps, serving in the Dominican Republic from 1966 to1968. Upon returning to the United States, Senator Dodd enlisted in the U.S. Army National Guard and Army Reserves. In 1972, he earned a law degree from the Brandeis School of Law at University Of Louisville. He practiced law in New London, Connecticut before his election to Congress in 1974.

Chris Dodd was born May 27, 1944, in Willimantic, Connecticut, the fifth of six children. He lives in Washington, D.C. and East Haddam, CT, with his wife, Jackie Clegg Dodd, and their daughters Grace and Christina.