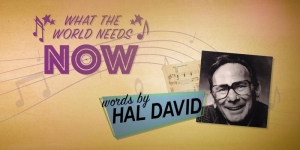 Please join us for a special, private screening of the PBS Television Special:

“What the World Needs Now: Words by Hal David” scheduled for the evening of Monday, May 20th, 2019.

There will be a “Conversation with Special Guests” immediately following the screening, hosted by NPC President, Alison Fitzgerald. Special in-person guests will include the fabulous Dionne Warwick and noted songwriter, Valerie Simpson (“Ain’t No Mountain High Enough”), both of whom are featured in the PBS TV show.

Don’t miss this trip down memory lane as these two ladies share their very personal stories about one of the greatest eras in pop music history.

Schedule for the evening:

The Bacharach/David/Warwick partnership was clearly one of the most prolific and successful collaborations in music. Bacharach/David commanded the pop music scene of the 1960s and early 70s, crafting one blockbuster hit after another, all of which landed on the Top 40 charts—and more important—into the landscape of our musical lives. The songs are everlasting, and so are the memories!

About the PBS TV Program:

Among Bacharach and David’s greatest hits:

Guests interviewed for the program include Bacharach, Dionne Warwick, Valerie Simpson, B. J. Thomas, music writer Francis Davis and NPR’s Terry Gross, along with a cavalcade of music-clip performances from Aretha Franklin, Cher, Barbra Streisand, B. J. Thomas, Dusty Springfield, Tom Jones, Jackie DeShannon, Glen Campbell and, of course, the fabulous Warwick, who is the inspirational muse for so much of the Bacharach-David songbook.

Hal David’s own oral histories and talk-show appearances provide a first-person commentary about his childhood, the craft of songwriting and his many accolades and honors, including Grammy Awards, four Academy Award nominations for Best Song, a Tony nomination for the Broadway show Promises, Promises, and a 1970 Oscar for “Raindrops Keep Falling on My Head” in the film Butch Cassidy and the Sundance Kid.

Brooklyn-born Hal David (1921-2012) began his songwriting career at the legendary Brill Building in Manhattan after service in World War II. Before he teamed up with Bacharach, David had worked with several different composers and achieved only halting success with pop songs for Vic Damone (“The Four Winds and the Seven Seas”), Teresa Brewer (“Bell Bottom Blues”), and Frank Sinatra (“American Beauty Rose”). By contrast, David’s initial collaborations with Bacharach in 1957 brought almost immediate success, with “The Story of My Life,” by country star Marty Robbins, and “Magic Moments,” an enormous international hit for Perry Como.

“Don’t Make Me Over,” Dionne Warwick’s first recording in 1962, launched the decade-long explosion of musical creativity and chart-topping hits that encompass the Bacharach-David songbook. It was the hard-rock era, a time torn by war and protest, but young hearts still yearned for love, and nobody articulated that yearning more memorably than Hal David.

His unadorned, conversational style, with Bacharach’s soaring melodies, found fertile ground not only in pop records around the world but also on Broadway, in dozens of Hollywood films, and most enduringly at weddings, where Karen and Richard Carpenter’s (“They Long to Be) Close to You” became the classic “first-dance” tune. The brilliant songwriting partnership ended unhappily in 1973, when the pressures of unimaginable success as well as a colossal Hollywood failure (the movie musical Lost Horizon) became too much for the team to sustain.

Click here to reserve your seat(s) for the program.