A Dinner Conversation with Deborah Rutter, President of the Kennedy Center 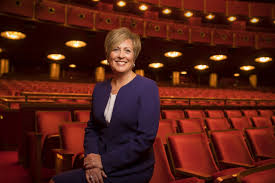 An exceptional opportunity to hear from one of the nation’s most adroit leaders in the arts.  Wharton Club Members & Guests invited.


This venue is fully handicap accessible and our meals are designed to accommodate vegetarians.

Transportation: The nearest metro station is Metro Center. Exit at 12th and F Street, NW. Your destination is the building named "Columbia Square" which will you see right in front of you as you exit the escalator.

Parking: There are several nearby parking garages including:

Helen Qubain
Karen Simons
Yeske Buie
Caitlin Wilmot
Camden Miller
... a total of 4 guests.
Note: to opt out from this list please sign in, go to My Account and change your preferences under My RSVPs.