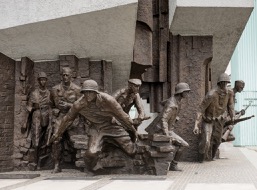 Purpose is to commemorate the 80th anniversary of the outbreak of World War II. The conference will gather historians, journalists, filmmakers, senior officials, museum curators, and publishers. Wharton Club Members & Guests are welcome.

We would be pleased to have you, colleagues, or friends to join us for this event. Simply go to https://ipoland.org/buy-ticket/ and select "Standard Price." If you wish to participate in the joint dinner on November 18, 2019, please select "Standard Price Including Joint Dinner” on this web page.

Leading scholars from Poland, Germany, the USA, and the United Kingdom will make presentations about the events that took place in Germany-occupied Poland 80 years ago.

The full program is accessible under iPoland.org/program.