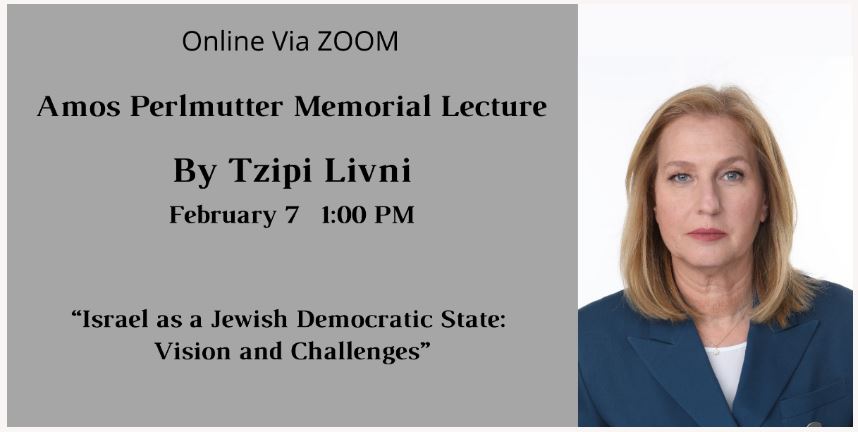 Tzipi Livni, former Israeli Vice Prime Minister, Minister of Foreign Affairs and Minister of Justice, will deliver American University's School of Public Affairs 2022 Amos Perlmutter Memorial Lecture, “Israel as a Jewish Democratic State: Vison and Challenges”. Ms. Livni will discuss what it means to be a “Jewish” state, how the values of Israel as a Jewish democratic state live in harmony and not in contradiction to this vision, and why the concept of “two states for two peoples” supports this vision.

Livni has served in eight different cabinet positions throughout her career, setting the record for most government roles held by an Israeli woman. She served as a member of the Israeli National Security Cabinet and the “security trio.” Livni is known for her efforts to resolve the Israeli-Palestinian conflict and was Israel’s chief negotiator for peace between Israel and the Palestinians during the last two rounds of negotiations.

Livni holds a law degree and practiced law for over a decade, specializing in commercial, constitutional, and real-estate law.

This annual lecture is in memory of beloved American University School of Public Affairs Professor Amos Perlmutter, who taught at the University for nearly thirty years, and was a world-renowned scholar of political leadership in the Middle East.

Live closed-captioning will be provided throughout the event. A ZOOM link will be sent before the event to those who register.

Co-sponsored by American University's School of Public Affairs and Center for Israel Studies.