NEC: Our National Space Economy: The Impact of NASA Spending & Space-related Production on the US Economy" with Alexander MacDonald( NASA) and Tina Highfill (BEA) 3/31

The National Economists Club: Our Nat'l Space Economy:The Impact of NASA Spending&Space-related Production on the US Economy" with Alexander MacDonald( NASA) and Tina Highfill (BEA) 3/31

‘Our National Space Economy: The Impact of NASA Spending and Space-related Production on the US Economy’ 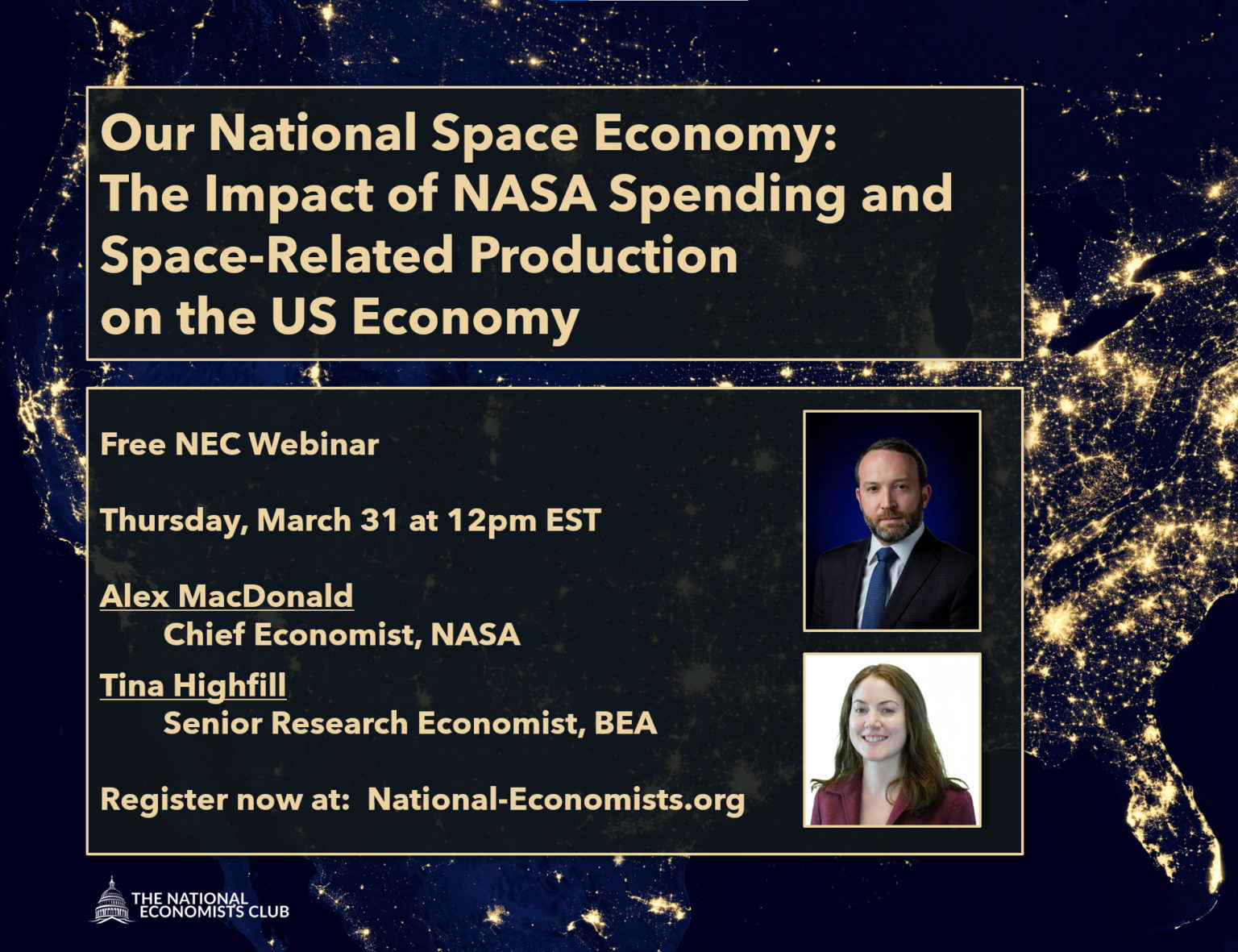 A topic of growing importance is the intersection of the economy and space exploration. In this presentation, Alexander MacDonald, Chief Economist for NASA, and Tina Highfill, Senior Research Economist for the US Bureau of Economic Analysis, will discuss how NASA spending and other space-related commerce impact the overall US economy using highlights from their recent paper, “Estimating the United States Space Economy Using Input-Output Frameworks.” Dr. MacDonald will also discuss his role as Chief Economist for NASA.

Please Note: If you do not receive a confirmation email with the event link by 11am the day of the event, please contact the NEC for that or any other questions at manager@national-economists.org.

Alexander MacDonald is the Chief Economist at NASA. He was previously the Senior Economic Advisor in the Office of the Administrator and was the founding program executive of NASA’s Emerging Space Office within the Office of the Chief Technologist. He is the author and editor of a number of NASA reports including Emerging Space: The Evolving Landscape of 21st Century American Spaceflight, Public-Private Partnerships for Space Capability Development, and Economic Development of Low-Earth Orbit.

He received his undergraduate degree in economics from Queen’s University in Canada, his master’s degree in economics from the University of British Columbia, and was a Clarendon Scholar at the University of Oxford where he obtained his doctorate on the long-run economic history of American space exploration. He was also an inaugural TED Senior Fellow and received the AIAA History Manuscript of the Year Award in 2016. Learn more here.

Dr. Tina Highfill is an award-winning, published economist leading research for high-profile and multifaceted economic analyses, including several that originated from the US Congress. Her research interests include Economic Measurement, Research Design, Health Services Research, and Organizational Theory. She received her undergraduate degree in economics from Virginia Tech, her master’s degree in applied economics from Johns Hopkins University, and her PhD in Health Services Organization and Research from Virginia Commonwealth University. Learn more here.

(Or Register FREE, if you're a Member)(Confirming email will contain the URL for the Online session)

(Or Register FREE, if you're a Member)(Confirming email will contain the URL for the Zoom session)