Can I Laugh At That? Streaming Panel Discussion 6/16

Four leading comedians discuss what they can - and can't - joke about in this hyper-politicized age. Wharton Club members & guests are invited. 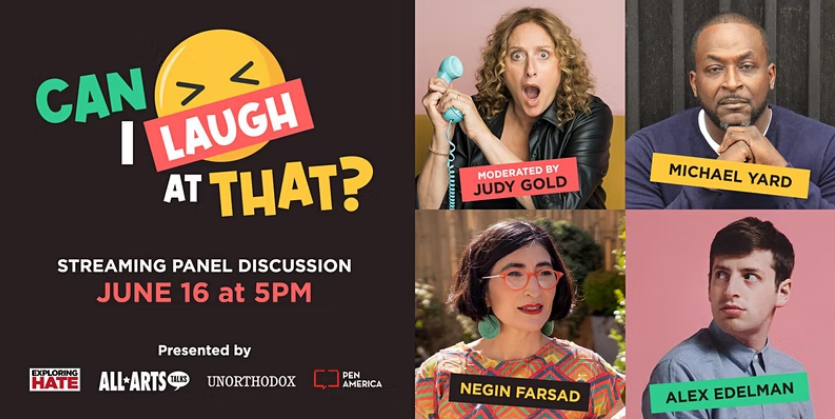 What a half-decade it’s been! Since 2016, we have seen two polarizing presidential elections; national reckonings around race, sex, gender, and power; an alarming spike in acts of hate and a once-in-a-century pandemic. In normal times, comedy can offer relief from pain and anxiety. But these aren’t normal times. For comedians, too, the world has changed, and their job—like so many jobs—has gotten immeasurably more difficult.

The WNET Group’s ALL ARTS and EXPLORING HATE present: “Can I Laugh At That?" Four leading comedians discuss how they do their jobs in today’s world. It’s a world where a failed joke can end up on social media, dissected by millions. Where the line between an acceptable joke and one that crosses the line is blurrier than ever. Where bad news does inspire good comedy ... even if we're laughing through our tears.

Our promotional partners are UNORTHODOX and PEN America.

Everyone who registers will receive an email with the streaming link.

Judy Gold, author of "Yes, I Can Say That"

Alex Edelman, stand-up and star of Off Broadway show,  "Just for Us"

Negin Farsad, director/producer of the feature film, The Muslims Are Coming!, and selected as a TEDFellow for her work in social justice comedy.

Michael Yard, stand-up and alumnus of  "The Nightly Show with Larry Wilmore"

Exploring Hate: Antisemitism, Racism and Extremism is The WNET Group's reporting initiative about the roots and rise of hate in America and across the globe. Exploring Hate provides historical programming, examines present-day threats, and seeks to highlight solutions. For more information visit pbs.org/exploringhate.

Building on The WNET Group’s longstanding commitment to quality arts programming that is accessible to all, ALL ARTS, a New York Emmy-winning arts and culture hub, was created to bring together art, artists and art lovers, because more art in the world makes the world better. For all the ways to watch, visit AllArts.org/Everywhere.

Unorthodox, the leading Jewish podcast, offers a fun weekly take on Jewish news and culture. It is a production of Tablet Magazine and hosted by journalists Mark Oppenheimer, Stephanie Butnick, and Liel Leibovitz. Click here for more information and to listen to past episodes featuring Judy Gold and Alex Edelman.

Founded in 1922, PEN America is the largest of the more than 100 centers worldwide that make up the PEN International network. PEN America works to ensure that people everywhere have the freedom to create literature, to convey information and ideas, to express their views, and to access the views, ideas, and literatures of others. Click here for more information.

Click here to reserve your seat(s) for the panel discussion.

Steven Goodman
Robert Swartz
... a total of 2 guests.
Note: to opt out from this list please sign in, go to My Account and change your preferences under My RSVPs.

for the panel discussion.