Meet Farah Nayeri who will Discuss "Takedown: Art and Power in the Digital Age" 10/18

Farah Nayeri addresses the difficult questions plaguing  the art world, from the bad habits of Old Masters, to the current grappling with identity politics. Wharton Club members & guests are invited! 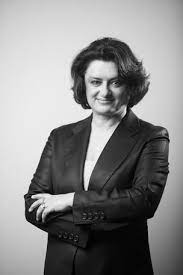 Farah Nayeri was born in Iran and spent her childhood years in Tehran, Rabat and Cairo before settling in Paris. There, she became a reporter for Time Magazine, covering French politics, society and culture. She then wrote for The Wall Street Journal Europe -- producing political op-ed pieces and reviews of exhibitions of Marc Chagall and Tom Wesselman, as well as of ex-President Valery Giscard d'Estaing's first novel. Joining Bloomberg in 1995, she was posted two years later as bureau chief to Rome. She became a tenant (among many) of the Palazzo Doria Pamphilj, home to Velazquez's fabled Portrait of Pope Innocent X.

Since 2001, Farah has lived in London, making regular jaunts to France, Italy and Spain. Over the years, her roster of interviewees has come to include artists David Hockney, Ai Weiwei, Jeff Koons, Joan Jonas and Richard Serra; architects Zaha Hadid and Frank Gehry; songwriter and poet Patti Smith; and actor Morgan Freeman. Farah has steered New York Times conferences in Europe and the Middle East, and chaired panel discussions for the World Economic Forum. She has spoken at Sciences-Po in Paris and at the Royal Academy of Arts in London. She is a classically trained pianist, and a devotee of flamenco dance.