Most people know what it is to get hungry. But persistent hunger and a lack of access to convenient and affordable healthy foods is something much more, disproportionately affecting communities already underrepresented in news coverage. Everyone can learn more about these important issues Wharton Club members & guests are invited! 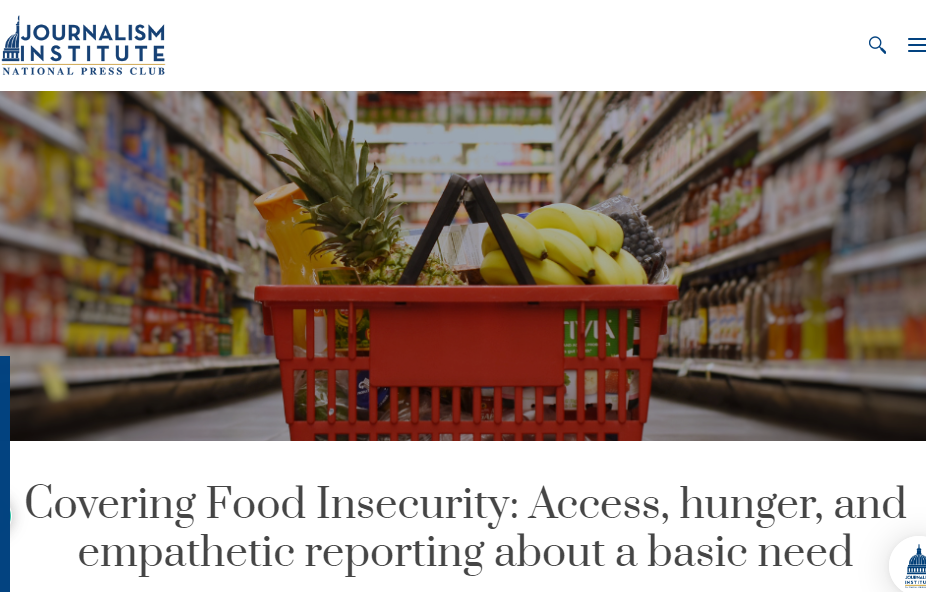 Most people know what it is to get hungry. But persistent hunger and a lack of access to convenient and affordable healthy foods is something much more, disproportionately affecting communities already underrepresented in news coverage. Food insecurity can be difficult for journalists to cover consistently because of its seeming invisibility.

Food deserts and insecurity throughout the U.S. are growing and have gained attention as cities have experienced higher rates of food insecurity during the coronavirus pandemic. As school-age students return to classrooms this fall, they’ll do so without the universal meal waivers that have helped struggling families through the last two years. And the May 14 mass shooting at a Tops Friendly Markets store in Buffalo, New York, brought attention to food inequities in the predominantly Black community while the store remained closed after the attack.

These communities are in your coverage area, and reporting this deeply important, fundamental access issue is critical to finding solutions. Register today to join the National Press Club Journalism Institute at 11:30 a.m. ET on Friday, Oct. 21 for this discussion via Zoom about what journalists can cover at the intersection of food access, community impact, and systemic racism.

Participants will learn how to:

We hope you’ll join us for this important conversation, supported with funding from the Gannett Foundation. Please email Beth Francesco, deputy executive director for the Institute, with questions.

Alejandro Figueroa covers food insecurity and the business of food for WYSO through Report for America — a national service program that places journalists into local newsrooms. He particularly covers the lack of access to healthy and affordable food in Southwest Ohio communities, and what local government and nonprofits are doing to address it. He also covers rural and urban farming

Figueroa is a 2021 graduate of the E.W. Scripps School of Journalism at Ohio University, and while there he reported for The New Political, a student-run publication focused on politics and government. His reporting has been featured on NPR, The GroundTruth Project and the Ohio Newsroom.

Figueroa was born in a small coastal town in Puerto Rico and in 2014 he and his family moved to Columbus, Ohio. When he’s not reporting, he enjoys going out on a hike and he sometimes daydreams about restoring an old pickup truck.

Bridget Huber is a staff writer at FERN. Her work has been published and broadcast by National Geographic, Public Radio International, The New York Times, The Lancet, Mother Jones, The Associated Press and many others.

A graduate of UC Berkeley’s journalism school, she’s received grants, awards and fellowships from The Pulitzer Center on Crisis Reporting, The UC Berkeley/11th Hour Food and Farming Journalism Fellowship and Mesa Refuge, among others. She speaks Spanish, French and some Portuguese and lives in Portland, Maine.

Lauren Lindstrom is an independent journalist focused on health and housing as an O’Brien Fellow in Public Service Journalism at Marquette University. She previously covered affordable housing and homelessness for The Charlotte Observer, writing about the human toll of evictions during the pandemic, substandard housing conditions and challenges to address homelessness.

She was also the health reporter for The Blade in Toledo, Ohio, where she wrote about the state’s opioid crisis and childhood lead poisoning. Lauren is a Northwestern University graduate and a former Report for America corps member.

Karen Robinson-Jacobs is a Chi-Town native and an award-winning journalist who has been chasing the big story for decades. She serves as an investigative reporter for media company Lee Enterprises on its newly formed Public Service Journalism team.

She also is a Knobler Fellow with Type Investigations and recently completed one year as a Corps member with Report for America, covering issues of concern to African Americans for the St. Louis American.

She spent 15 years writing about food, sports business and real estate for the Dallas Morning News, where she was part of the Pulitzer Prize Finalist team lauded for coverage of a 2016 shooting spree that killed five police officers and injured nine others. Prior to that, she spent 15 years with the Los Angeles Times, where she worked with emerging journalists in the paper’s Metpro program, and helped launch the paper’s website and new media department. While in Los Angeles she also served as vice president of the local chapter of the National Association of Black Journalists. A long-time Midwesterner, Robinson-Jacobs also worked at the Milwaukee Journal, where she was among the first African American editors.

The National Press Club Journalism Institute promotes an engaged global citizenry through an independent and free press, and equips journalists with skills and standards to inform the public in ways that inspire a more representative democracy. As the non-profit affiliate of the National Press Club, the Institute powers journalism in the public interest.

The National Press Club Journalism Institute serves thousands of people daily with our newsletter, online programming, writing group, and other support. The Institute depends on grants, foundation funds, and contributions from individuals like you. Your donation today allows the Institute to offer the majority of its programming at no cost. If you value the Institute’s services, please donate today. Any amount helps.